This example is about a Business Plan developed in the Value Management Platform, for a Low Cost Carrier (LCC). Its Business Ecosystem is represented in the picture below. It is representative and typical for LCC’s such as Ryanair, SouthWest Airlines and EasyJet. This as opposed to Full Service Carriers. 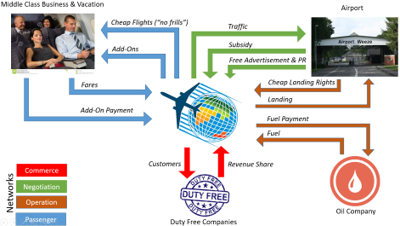 But, despite its current success, the LCC’s CEO wants to sustain its competitive advantage in the future also, and so, wants to grow further.
In the To-Be Phase of the Business Plan, multiple Alternative approaches are analyzed therefore, to find the best basis for business growth.
The first Alternative that is analyzed is about sustaining the “Status Quo”, also known as “unchanged policy”, or natural growth, or “do nothing”, but just let market and organizational conditions evolve spontaneously. This turns out to be quite OK financially, but passenger satisfaction is a big concern, as the LCC is outweighed by Full Service Carriers on this Value.
Hence, as another Alternative, the impact is assessed of a steep ticket price drop. The CEO came to this, based on the consideration that the LCC’s passenger satisfaction is determined by three Values in a mix:

Whereby different Market Segments, such as seniors, business passengers and youngsters, associate their own weights with these Values.

As the LCC did already its extreme on the first two Values, the CEO determines to investigate, by a second Alternative, the impact of the steep ticket price drop (“low fares”). This really does do well to passenger satisfaction, but, as this price drop will, by itself, ruin financial margins, other measures have to be taken and worked into this Alternative as well, focusing on stimulating sales (such as more aggressive in-flight sales) and cost cutting. The result is quite OK.

But, as the LCC CEO wants to avoid blind spots, he looks further, and realizes that, due the steep ticket price drop, many more passenger will fly by the LCC, which leads to a significant extension of the LCC’s aircraft fleet, causing the LCC to get quite a big loan to strengthen its capital, and which also makes it more dependent on investors. Logically the CEO reasons that it may be worthwhile investigating no longer purchasing all aircraft, but by leasing a certain percentage of the fleet. This Alternative (“low fares & partial lease) also has bigger impact on the LCC organization (for which the Business Plans in the VDMbee Value Management Platform provides a blueprint as well).

The Alternatives are compared with each other on a combination of three critical success factor Values (see also the column chart below): profit margin, passenger satisfaction and pay-back period (the latter as related to the acquisition of external capital to fund the aircraft fleet).

The next picture provides an overview of all Phases and Alternative of the Business Model Plan for the LCC. 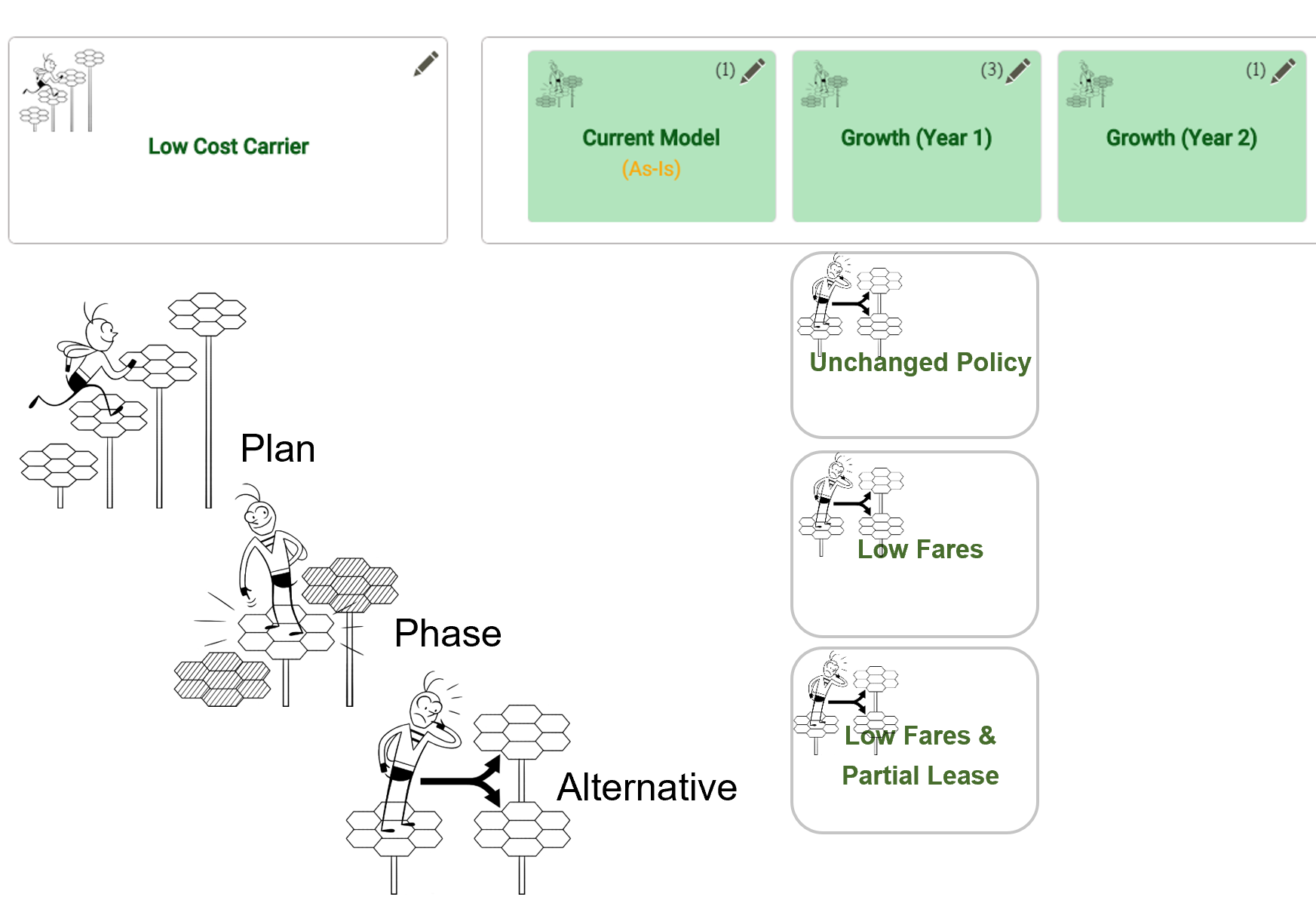 About this VMP example

A more detailed discussion of the LCC case, as analyzed and planned in the VDMbee Value Management Platform, is provided by the following Use Case description on the VDMbee website: Study about Continuous Business Model Planning with the Value Management Platform.
You can download (and import) this Plan via the “Cloud” button on the Plan property page: